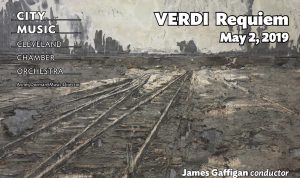 CityMusic is still seeking a few chorus members to sing in the chorus for Verdi’s Requiem on May 2, 2019 at the Maltz Center for the Performing Arts.

James Gaffigan, CityMusic Cleveland Music Director from 2005 to 2010, returns to the podium to lead Giuseppe Verdi’s Requiem, a masterwork infused with the same drama and passion that mark his greatest operas. This special concert, on the Jewish “Day of Remembrance” (Yom Hashoah), commemorates the victims of the Holocaust. It recalls the sixteen performances of the Requiem in the Nazi concentration camp at Terezín (Theresienstadt), Czechoslovakia by Jewish prisoners who were allowed to carry on musical activities within the walls and barbed wire. The most extraordinary performance took place on June 23, 1944, when the Germans, trying to propagandize against the ominous reports about the camps circulating around the world, hosted a delegation of Swiss and Danish representatives from the International Red Cross. In preparation for the visit, the Nazis “beautified” the camp, stopped the transports to Auschwitz, found appropriate clothes (though no shoes) for the musicians, gave them a few extra rations, and ordered a performance of the Verdi Requiem, which the German officers would attend with their guests. Conductor Rafael Schäcter told his musicians, “We will sing to the Nazis what we cannot say to them.”

Contact Chorus Director Ben Malkevitch if you are interested in joining this volunteer chorus, or if you have any questions. ben@lcc-church.org