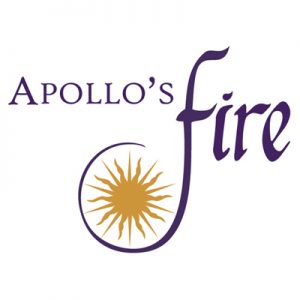 GRAMMY® award-winning ensemble Apollo’s Fire is one of the world’s leading period-instrument baroque orchestras and is based in Cleveland, Ohio. Currently in its 30th season, the ensemble is led by its founding Artistic Director, Jeannette Sorrell (AD).

Apollo’s Fire (AF) is one of the few American ensembles that maintains:

Apollo’s Fire has performed at such venues as Carnegie Hall, the BBC Proms (London), the Royal Theatre of Madrid, the Tanglewood, Ravinia, and Aspen Music Festivals, the Boston Early Music Festival series, the Library of Congress, the Metropolitan Museum of Art (NYC), and many others. In addition, AF launched a new satellite series in Chicago in 2021, along with a major school partnership (“SIDE BY SIDE”) in a South Chicago suburb.

Apollo’s Fire is also a leader in innovative outreach, having launched its Community Access Initiative in 2017. The CAI breaks down financial and geographic barriers to attendance, and brought in over 5000 new attendees in two years. The second phase of the CAI, known as the MOSAIC Project, was launched in the 2019-20 season and seeks to nurture young musicians of color through school partnerships, college internships, and artist fellowships.

Apollo’s Fire has an annual budget of approximately $2.75 million and a staff of 5 full-time and 7 part-time employees. The office suite is located in the historic Rockefeller Building in Cleveland Heights.

The Business Manager reports to the General Manager and works closely with the management team and outside contracted CPA firm in a collaborative manner to advance and support the mission of Apollo’s Fire.  He/she is responsible for financial reporting, processing accounts payable and receivable, reconciling bank statements, coordinating the annual budgeting process, managing employee benefits, and providing administrative assistance to the General Manager and Director of Development.

This is a 3/4 to full-time position (negotiable). We seek someone with non-profit experience who will enjoy communicating and collaborating with a staff of arts management professionals.

A detailed job description is available on our website here.