IMPORTANT! Due to the Coronavirus (COVID-19) health crisis events may be canceled or postponed. CLICK HERE to find out more. 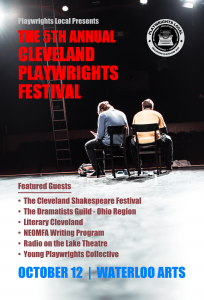 Playwrights Local announces The 5th Annual Cleveland Playwrights Festival, its latest free, annual gathering for playwrights, theater-goers, and arts patrons. Presented on Saturday, October 12, the Festival features open classes and craft talks, new works by local authors, a live recording of a radio play, two special showcases, and more. Sessions run from 12:00 p.m. to 11:00 p.m. at the Creative Space at Waterloo Arts in North Collinwood (397 East 156th Street, Cleveland, OH 44110). All offerings are free and open to the public, and tickets or reservations are not required. The Festival is intended for adults and teens. A complete schedule of sessions in The 5th Annual Cleveland Playwrights Festival can be found online at Playwrights Local’s website: www.playwrightslocal.org/. Additional information is available by emailing info@playwrightslocal.org or by calling (216) 302­-8856.

Free parking in designated public lots on Waterloo Road and on nearby streets.